Initial findings of ERC PRIME Youth on Radicalisation is OUT

Initial findings of ERC PRIME Youth were shared in a workshop, hosted by the European Institute of İstanbul Bilgi University, held on 8 October 2020. The workshop on “Radicalization and Political Extremism” addressed several issues on the escalation of fear and prejudice among the youth, constrained by the global financial crisis and the refugee crisis. How to deal with the emerging confrontation among natives and immigrant youths was the key question to be handled...

European Institute of İstanbul Bilgi University held an online workshop titled “Radicalization and Political Extremism” on October 8, 2020 to share the initial findings from the ERC-funded PRIME Youth Project. The presentations on the current debates surrounding radicalization were also held by the esteemed colleagues from different international universities.

Moderated by Prof. Constantina Badea of Université Paris Nanterre, the workshop was carried out as a closed workshop, with an invited group of participants including the researchers of the Prime Youth Project and the guest speakers in order to provide more space to discussion and brainstorming. Prof. Badea opened the workshop with her remarks on the natives and Muslim youngsters in Europe, who are the focus group of the project. The Principle Investigator of the Project, Prof. Ayhan Kaya of Istanbul Bilgi University has later continued to point out that both groups have their own separate cultural repertoires based on the past, myths, memories and values: “The natives have references to homogeneity, nativism, and historical continuity while the Muslim youngsters want to become good persons following the path given them by the holy book” he briefly said.

Following up Prof. Badea’s articulation of social psychological aspects of radicalisation among the European youth, both native and Muslim-origin, Prof. Ayhan Kaya, ERC AdG Holder, reconfigured the question as it is then “how to make it possible for these groups to communicate with each other so that they can have a dialogue”. To him, the answer is to come up with a common cultural repertoire which can be used by both groups to reassemble what is social. He added then: “It is probably not possible to offer this common cultural repertoire by bringing elements from the retrospective past. It is rather the future that we need to concentrate on: a future that holds them together; a prospective idea to work for together. And hope also becomes essential for these groups together to hold on to…”

Regarding the formation of common cultural repertoire, Prof. Kaya indicated that it could possibly be formed by means of music, arts, culinary, dance, and popular culture in short. “Dance stages, rap, graffiti, gastronomic workshops and similar venues, in which members of both groups can get together and compete, dialogue, talk and communicate with each other, communicating their experiences of discrimination, alienation, exclusion in everyday life” he explained.

“Local” is also among those Prof. Kaya emphasized in his remarks. He said the remedy for radicalization should also be local. This is mainly because, he emphasized, aestheticisation of competition, rivalry, violence, and radicalisation is a method to re-channel the motivations and energies of youth groups through music, arts, popular culture, culinary etc. at local level. It is all about local.

David Bourguignon from Université de Lorraine Metz, in his presentation titled “From Islamophobia to Communitarianism: The dynamic between French and Muslim identities”, called attention to the fact that Muslims generate a stronger identification with Islam when they face Islamophobia in everyday life. However, he added that this does not necessarily mean that they civically become less French, less German, less Dutch or less Belgian. In this sense, he put an emphasis on the need of letting Muslims generate affiliations with their ethno-religious associations through which they could reaffirm their group identity.

Prof. Kaya was among the ones appreciating Bourguignon’s remarks on the Muslims’ affiliation. He added that “Muslims’ affiliation with religio-cultural associations is not a barrier before their integration. It is rather auxiliary to their integration as they provide them with social capital, solidarity and protection that are needed to feel stronger and resilient in times of crisis”.

Ideological obsession as a form of addiction

Jocelyn J. Bélanger, assistant professor of Psychology at New York University Abu Dhabi, posited that violent extremism is driven by “ideological obsession”. In this sense, he explained ideological obsession is a form of addiction, which is being preferred by the disenfranchised people to overcome their socio-economic and nostalgic deprivation. Accordingly, Islamist youth and nativist youth may also resort to ideological obsession as they are willing to compensate their alienation, anomy, feelings of exclusion, discrimination and grievance.

Bélanger also stated that using counter-narrative to de-radicalize people does not work. To him, instead, we need to find places and channels to re-channel their motivations and energies away from extremism and violence.

The workshop then continued with the presentation of Dr. Jais Adam-Troian from American University of Sharjah, who focused on the social identification. He pointed out the fact that although the link between social identification and political behavior is well-established, current evidence relies mostly on self-report data. Dr. Adam-Troian, on this note, explained his research conducted with his colleagues, to tackle this issue they combined real-life protest counts in the US between the years of 2017 and 2020. Dr. Adam-Troian concluded that the use of the third plural pronoun “We” in social media posts to mobilise the masses is much more successful than using the first singular pronoun “I”. This is the success of the right-wing populist movements, he said.

Also, to share the initial findings of the Prime Youth, Ayşe Tecmen and Aysenur Benevento, post-doc researchers of European Institute, made their presentations. Whereas Dr. Tecmen discussed EU’s articulation of radicalisation, Dr. Benevento shared initial observations about the research data of the project based on values analysis.

To see details of the workshop and to reach out full programme please click here.

PRIME Youth in a nutshell

The PRIME Youth is "Nativism, Islamophobism and Islamism in the Age of Populism: Culturalization and Religionization of What is Social, Economic and Political in Europe". The project analyses the current political, social, and economic context of the European Union, which is confronted by two substantial crises, namely the global financial crisis and the refugee crisis. These crises have led to the escalation of fear and prejudice among the youth who are specifically vulnerable to discourses that culturalise and stigmatize the “other”.

Young people between the ages of 18 to 30, whether native or immigrant-origin, are the focus of the Prime Youth. In exploring the socio-economic, political and psychological aspects of radicalisation among the European youth, the main question of the project is: How and why do some European citizens generate a populist and Islamophobist discourse to express their discontent with the current social, economic and political state of their national and European contexts, while some members of migrant-origin communities with Muslim background generate an essentialist and radical form of Islamist discourse within the same societies?

In order to understand and explain the relationship between Islamophobism and Islamism emerging in both national and transnational spaces, the field research comprises of in-depth interviews with native youth and Turkish and Moroccan-origin youth in Germany, France, Belgium, and the Netherlands. This project have been carried out by İstanbul Bilgi University’s European Institute between 2019 and 2023.

The PRIME Youth has received funding from the European Research Council (ERC) under the European Union’s Horizon 2020 research and innovation programme grant agreement no. 785934. 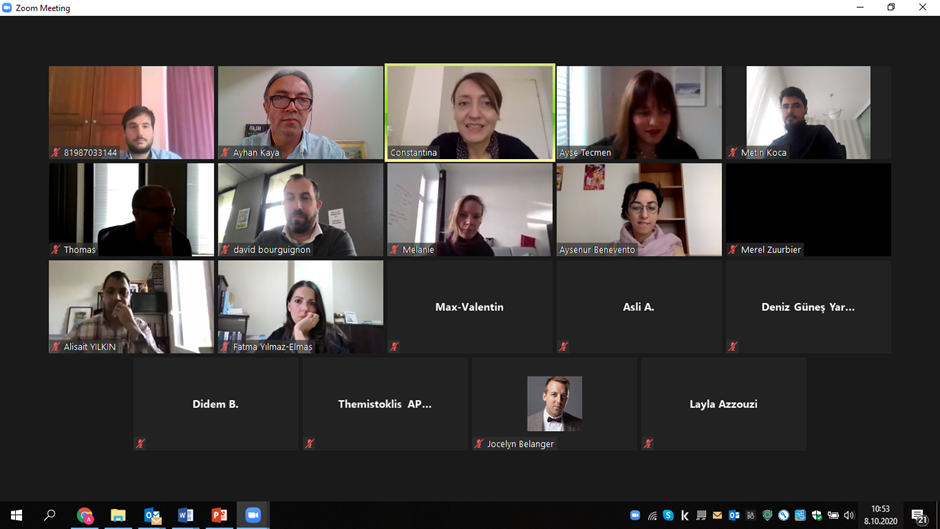